The more I labour away at the first draft of what I’m calling Nano 2015 (three months and counting of writing almost every day – yay!), the more I realise that writing a book is a lot like attempting to paint a masterpiece.

About three years ago, I decided to take my flirtation with art a bit more seriously. I invested in some classes, a few books and began studying techniques and practicing them in digital. 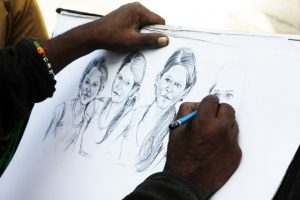 One thing you learn very quickly when you put pen to paper is that there is nothing quick about art. There’s no such thing as slapping out a masterpiece. After years of practice you might hone your muscle memory enough to do sketches or cartoons in a matter of minutes, but to produce something you’re proud of takes a lot of time. People will often comment on how “talented” an artist is, and I do think that talent plays a part, but most of it is hard work. Many sketches go into a painting, much studying of composition and form is involved before the sketches even start. We all understand this about art, it’s part of why we value art.

But when it comes to writing, there’s this misconception that you churn out a book, do some edits and then send it off to a publisher. I know I’m personally guilty of this. I used to beat myself up when I couldn’t get a paragraph or a description right, I’d stop writing when the plot no longer felt right or when I started to dislike a character I was initially supposed to love. I’d soak up articles on how to make my writing better.

For art I had this intense process:

1. Have idea
2. Work out the composition
3. Find some reference material
4. Sketch
5. Refine sketch
6. Begin building up the lights and the darks
7. Add layers of colour (known as scumbling in oil painting)
8. Add the final shadows and highlights

For writing my process was:

1. Write as well as possible

So here’s the thing, and something that’s only really hit home with this particular project:

A first draft is a sketch.

If I was doing this in PhotoShop, it would be on its own layer so that later I could turn the opacity way down and re-trace the parts I really liked. 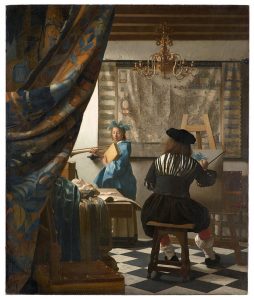 On the one hand, that sounds like a lot of work and a lot of time spent perhaps unnecessarily, but on the other hand, this realization has made it so much easier for me to move forward with this story. It’s liberating to accept that it doesn’t matter if the bits in-between aren’t quite right, or if the tone is slightly off. Paragraph-by-paragraph details don’t matter in a sketch. What matters is figuring out the over-all composition.

I believe composition is just as important with a book as with a piece of art. You want to have things in the foreground (main plot and characters) and things in the background (subplots and supporting characters). You want a pleasing structure.

I’ve tried the approach of starting at a point and just writing and seeing where it goes. This is what Nano calls “pantsing” and some people claim it works really well. But I find that eventually I tend to get stuck – much like if I start painting without planning where things go. I very literally paint myself into a corner.

So, I’ve realized that this is the purpose of a first draft. Not getting details perfect, but figuring out everything that happens and when and how. There’s plenty to work out. The build-up to the climax, the high and low points of action, the pacing, how to fly a Boeing*… I’ve found that it doesn’t matter how much I think I know about how characters get from A to B. Until I actually make them do it, I’ll never know what’s really going to happen.

In this book I’ve added in two whole chunks that I hadn’t planned because the structure needed them, and I’m only two thirds of the way through.

Now things are getting a bit more interesting because I’m “working over” the “sketch” of the second half of the book that I did as Camp Nano in 2014. There are over 50k words written in this first first draft and many of them don’t fit with what the novel has become. So, I’ve turned down the opacity (read: I have it open in a separate Word document) and I’m re-tracing the bits that still work and the bits that I like and I’m essentially creating a bolder outline, refining the sketch.

For the first time, I’m actually looking forward to editing. I’m anxious to go back to the earlier sections (that I haven’t allowed myself to touch) and add contrast. I can’t wait to be able to start with the washes of colour (description), final highlights (sparkling dialogue, great grammar) and lowlights (deleting unnecessary sentences, refining paragraphs, breaking it into chapters).

But none of that happens with draft one.

* Another similarity: artists need references. My main reference for this writing project has been YouTube. It’s amazing how much easier the research phase of writing is with the Internet. I managed to take an actual tour of the ship that my characters were on… but that’s a blog post for another day. 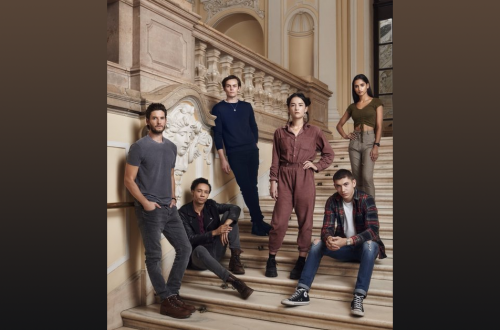 Grishaverse Netflix cast announced! What do you think?