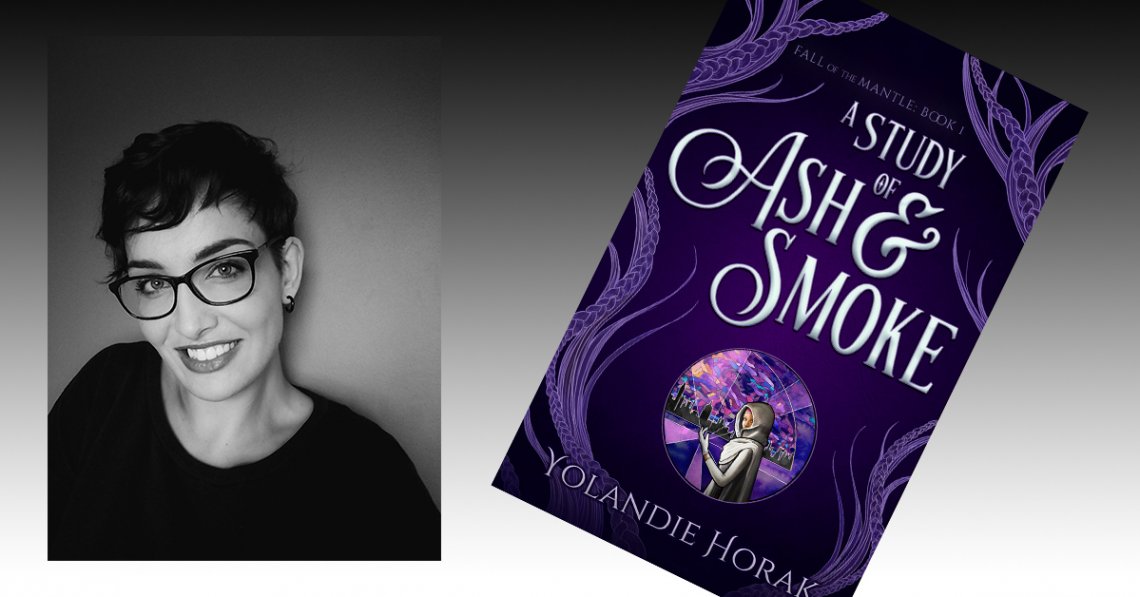 Plague, deception, and spies in a steampunk setting? Yes please! This is what the upcoming A Study of Ash & Smoke by Yolandie Horak has to offer. Read the blurb below:

Cara should be the queen of Mordoux, but instead she must pretend to be a boy named Carl.

Her father hunts her, and will kill her if he finds her.

She’s trapped with him beneath the Mantle forcefield that isolates the kingdom of Aelland. The only way to elude him is to hide as a male physician’s apprentice, keeping her telltale royal hair covered beneath medical robes.

But when the enigmatic Nathan Cutter takes over her apprenticeship, her secrets could be exposed. Nathan knows surgery, not deception, and certainly not the feelings he starts to develop for his new apprentice. Pulled into an ever tighter web of lies, he must decide how much he is willing to give up for a person he hardly knows.

While Cara’s father tries to manipulate the puppet queen he installed in Cara’s place, a terrible plague threatens to rot Aelland from the inside.

Can Cara and the other physicians find a cure? Or is the only solution the fall of the Mantle, and surrender to the emperor who’s claimed the rest of the Seven Kingdoms?

Yolandie was kind enough to answer some questions to offer greater insight into her life and the ideas behind the novel. Read on to find out more.

What are your favourite books?

I adore The Lord of the Rings, as these are the first books that really sucked me into the world of fantasy. I also love Terry Pratchett’s Discworld series, especially books that feature Granny Weatherwax or Death, and more recently, The Six of Crows duology by Leigh Bardugo. I have intense book hangover because of Kaz Brekker and the Dregs.

What made you decide to write A Study of Ash and Smoke?

A huge chunk of inspiration hit when I watched a SciShow video about deadly viruses. I’d written a trilogy with huge cyborg monsters and a tyrant king (this trilogy is now being rewritten) and wondered how it would be to write something where the threat is something tiny instead.

I’ve also always wanted to write something with spies and deception, the found family trope, and characters who break the Rambo/Wonder Woman archetype, but have weaknesses or internal struggles, like intense anxiety. The protagonist of the trilogy I’m reworking had no weaknesses. I wrote her when the need for Strong Female Characters was overwhelming, and her humanity was compromised in the name of making her strong. I wanted to fix that in the next book I wrote. So in Ash & Smoke, the protagonist, Cara, is pretty much the opposite of Strong Female Characters. A lifetime of abuse moulded her into a woman who is anxious and afraid, but also makes her more human.

Was there anything in your real life or experiences that influenced this novel?

I’m an immigrant. Living in different countries means we’ve experienced German Christmas markets, medieval castles, European city-plain culture, North American food trucks and festivals, diverse landscapes, all the weather, and we’ve met people from every nook and cranny the world has to offer. I’ve injected a lot of that into Ash & Smoke. There’s a huge difference in writing about snow when you’ve never experienced snow, versus writing about snow while it’s falling just outside your window.

I struggle with intense anxiety and mental health issues, and wanted to write a character who has the same problems. Cara is in no way based on me, though. We just share angst.

Was there a song or band you listened to a lot while writing?

I listened to Gabrielle Aplin, Ruelle, Florence and the Machine, and Hozier on repeat while writing Ash & Smoke.

Do you have “face claims” for any of your main characters? Who and why?

I distinctly picture Jim Broadbent for Magnus, because Mr. Broadbent has such an expressive face and reminds me of a sweet grandfather. Seraphine’s looks and personality are based on my close friend, Rita. Through the drafts, Sera took on a personality of her own and doesn’t resemble Rita as closely as she initially did, but that inner strength is still 100% Rita.

Please share one of your favourite quotes from the novel.

This is from a scene in the morgue, when Cara practices incisions and sutures on a cadaver for the first time. I love this scene.

“You’re going to make a sternal incision. Put your left hand on the chest. Now, pull the skin tight with your thumb and index finger. Good. As you cut, you’ll move the left hand to keep providing tension on the skin. Place the blade and start cutting.”
The tip of the blade trembled as Cara lowered it to the small hollow between the collarbones. She took a breath and started to cut. The skin parted like torn paper.
“Stop.”

A Study of Ash & Smoke comes out on 20 May. Preorder here.