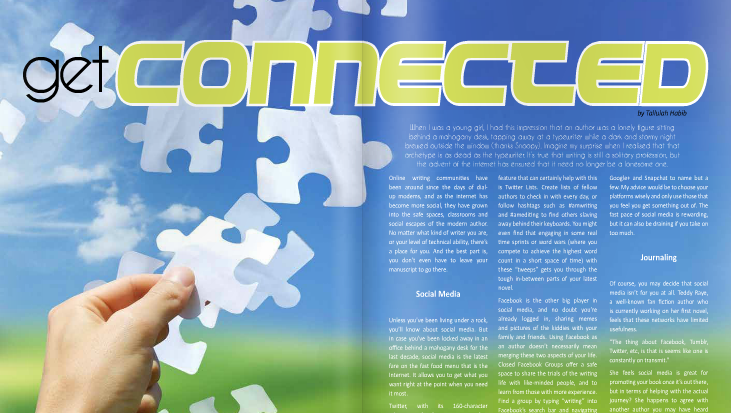 This piece originally appeared in the digital publication Authors Magazine.

When I was a young girl, I had this impression that an author was a lonely figure sitting behind a mahogany desk, tapping away at a typewriter while a dark and stormy night brewed outside the window (thanks Snoopy). Imagine my surprise when I realised that that archetype is as dead as the typewriter. It’s true that writing is still a solitary profession, but the advent of the internet has ensured that it need no longer be a lonesome one.

Online writing communities have been around since the days of dial-up modems, and as the internet has become more social, they have grown into the safe spaces, classrooms and social escapes of the modern author. No matter what kind of writer you are, or your level of technical ability, there’s a place for you. And the best part is, you don’t even have to leave your manuscript to go there.

Unless you’ve been living under a rock, you’ll know about social media. But in case you’ve been locked away in an office behind a mahogany desk for the last decade, social media is the latest fare on the fast food menu that is the Internet. It allows you to get what you want right at the point when you need it most.

Twitter, with its 160-character telegrams of information, is perfect for quick and dirty research and is preferred by authors as famous and well-established as JK Rowling. It’s also become an essential means of keeping in touch with your readers. Joining Twitter can be overwhelming, and a feature that can certainly help with this is Twitter Lists. Create lists of fellow authors to check in with every day, or follow hashtags such as #amwriting and #amediting to find others slaving away behind their keyboards. You might even find that engaging in some real time sprints or word wars (where you compete to achieve the highest word count in a short space of time) with these “tweeps” gets you through the tough in-between parts of your latest novel.

Facebook is the other big player in social media, and no doubt you’re already logged in, sharing memes and pictures of the kiddies with your family and friends. Using Facebook as an author doesn’t necessarily mean merging these two aspects of your life. Closed Facebook Groups offer a safe space to share the trials of the writing life with like-minded people, and to learn from those with more experience. Find a group by typing “writing” into Facebook’s search bar and navigating to the Group tab. Note that a Closed Group means you’ll need to apply to join, but also that only members of the group can see what you post there.

There are tons of other social media platforms to explore. Instagram, Tumblr, Google+ and Snapchat to name but a few. My advice would be to choose your platforms wisely and only use those that you feel you get something out of. The fast pace of social media is rewarding, but it can also be draining if you take on too much.

Of course, you may decide that social media isn’t for you at all. Teddy Raye, a well-known fan fiction author who is currently working on her first novel, feels that these networks have limited usefulness.

She feels social media is great for promoting your book once it’s out there, but in terms of helping with the actual journey? She happens to agree with another author you may have heard of, George R R Martin, who maintains a LiveJournal.

LiveJournal was established in 1999 as one of the earliest social networks – a blogging platform with a comments section. What sets it apart from something like WordPress is the ability to add other users as friends and join interest-based communities.

According to Raye, LiveJournal is ideal when it comes to feedback on larger works and building close relationships with other writers.

“The acceptance, support and encouragement I found there from almost the moment I became part of the community was overwhelming. I had at my disposal a wealth of writers and readers from all over the world, from all walks of life and all kinds of experiences and lifestyles, who opened up my eyes to the myriad possibilities of becoming a serious writer,” she says.

“If I ever have any success as a writer, it will be because of the people who nurtured me on LiveJournal. “

There are a few sites like LiveJournal. Dreamwidth, for instance, is a popular choice for writers because it’s aimed especially at “people who create”.

Travelling back to the time when connecting to the web meant shouting at miscellaneous family members to get off the line, forums were the in thing – a magical way of connecting with other purveyors of the world wide web.

South African author, Cat Hellisen, credits the Absolute Write forums (still active) with being the classroom that gave her the building blocks to get where she is today.

“As with all kinds of writing groups, you can get bad advice and misinformation, and it’s best to do your research,” she says. “But writers work in isolation, and sometimes this can feel very depressing and lonely, so I do think having the support (online or real life) of a constructive writing group is invaluable. Not only that, but I’ve forged friendships with writers and readers of all kinds and levels through online forums. For those friendships alone, using AbsoluteWrite changed my writing world.”

While the concept may be dated, forums have in fact grown from strength-to-strength, offering a level of specialisation and an aspect of anonymity that social media does not.

Romance writer, Amity Lassiter, is an active member of a website called Romance Divas that has a thriving community forum. There’s something to be said for a community built around a single genre. It can address challenges specific to that particular category of fiction, and more established writers can pass on knowledge that might only be relevant to others working in the same area.

“It’s how I connected with my idol,” says Lassiter, “She made seven figures last year with her self-published books. If I could just have a fraction of her career!”