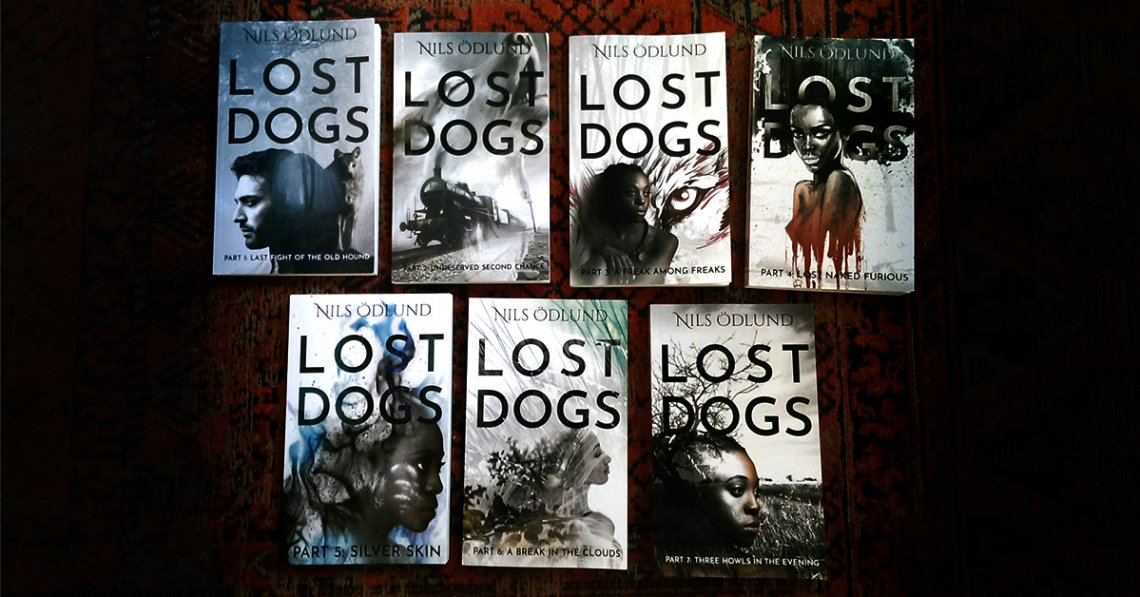 Today’s author interview features Nils Ödlund, author of the Lost Dogs series of books. The eighth book in the series comes out next week, so the first is currently on sale, scroll to the bottom for the link!

When retired prize fighter Roy van Waldenberger gets a chance to correct the worst mistake of his life, he leaves everything behind to set out on a quest for redemption.
Aspiring journalist Alene Moneya searches for her first big scoop, and what she finds will change her life forever, or end it.

Both Roy and Alene are therianthropes. Each of them has a beast living with their mind. It makes them stronger, faster, and tougher, and it’s slowly driving them insane.

Dark, personal, and intriguing, with relatable characters, and top-notch world building.
Lost Dogs is about internal conflict and moral dilemmas, with a focus on immersion and character development.

And here’s the interview:

Your Lost Dogs series is described as a story about werewolves that’s not a werewolf story, can you explain that a bit?


This comes down to genre expectation, and what readers expect of a werewolf story.


It turns out my book isn’t what people think it will be.


This isn’t intentional, and I had no idea about it when I started writing.


One of the things that got me into writing, was a fascination for what life in a fantasy world might be like for ordinary people. What’s it like to live in a world where magic is real, and where your history teacher at school is an elf who’s old enough to have taken part in the wars you’re learning about.


In light of that, Lost Dogs isn’t a story about werewolves, but rather about people who also happen to be werewolves – or therianthropes, as they’re referred to in the books. It’s how they deal with their affliction, and the impact it has on their lives (it’s also an adventure, but that doesn’t really get going until later on in the series).


That said, Roy, the main character of the first book, Last Fight of the Old Hound, is a world famous, celebrity prize-fighter, so he’s not exactly an ordinary person to begin with.


So, I’ve got this story about a superstar werewolf wrestler…


When I put it like that, it kind of sounds like the story is an action-packed, violent gore-fest, with a furry muscular dude who solves all his problems by tearing people limb from limb. In reality, the story is about a man wrestling with a moral dilemma. Roy must choose between two bad options, and on top of that, the wolf part of him is dead set on one of them. Much of the story takes place within his head, and the internal struggle with both his own convictions and the wolf, is a big part of it. There isn’t much action at all.


It’s not until I started promoting my book that I began discovering this. Many of my positive reviews included some comment along the lines of “I don’t normally read werewolf stories” and I’ve got critical reviews which complain that my book really isn’t a werewolf story.


I eventually began looking into this and it seems werewolves and shifters are closely associated with violent action, and steamy romance (often with some kinky twists). Pack dynamics is also a thing, with a rigid pecking order where members lower on the ladder are submissive to those above. This isn’t something I’d paid much attention to when I started writing, and I’m still quite hazy on the details.


The end result though, is that people who enjoy those kinds of stories end up disappointed with my book, while those who would enjoy my book, are reluctant to pick it up.


What inspired you to write this series?


I’d created a fantasy world, originally intended for table-top roleplaying games, and I wanted to show it off through a story. The initial idea was to write about someone travelling across the world and seeing different parts of it that way. Kind of like a road movie, except as a fantasy book, and by train instead of car (there are no cars in my setting).


I had a few characters I’d used in short stories already, and that I kind of knew, so I just had to come up with a reason for one of them to drop everything and head off across the world on a big journey. That’s what the first book in the series is about.


You recently started writing full time, can you tell us a bit about what that’s been like so far?


I started writing full-time in January. For a while, it went pretty well. I got stuff done, and I wrote a lot, but eventually my discipline began to slip. I’m not quite disciplined enough to write full time and actually write. I recently began working out again, after a long break, and it’s actually helped my writing productivity improve, but it’s too early yet to say if it’s a permanent thing or just a fluke.


Book sales haven’t been nearly enough to support me, and I need to be able to eat and pay my rent. It IS getting better though, but there’s still a long way to go before I can live off of my writing.


You used to work in customer service for Blizzard Entertainment, do you feel that job impacted your writing?


Almost all of my communication with players was in written form, either through chat or by mail, meaning I spent most of my day writing messages to people in one way or another. It wasn’t fiction writing, but it was writing that people needed to be able to read and understand. I also wanted them to respond to it in a positive fashion, even if I had to tell them I couldn’t actually help them.


I learned a lot about how people understand and misunderstand words, and I learned to express myself in a way that’s easy to understand, even for someone who isn’t a native English speaker.


I also think that the amount of time I spent chatting had a huge impact on the way I write dialogue – for better and for worse.


These days, when I write a dialogue between two people, I first write it out as a chat, with just the lines the characters are saying, complete with emotes and smilies and everything. Then, once that done, I “translate” it into prose by adding in beats and tags and thoughts between the lines.


You’ve lived in both Sweden to Ireland, which are both countries known for their rich folklore. Has this influenced your writing at all?


My debut novella, Emma’s Story, is quite heavily influenced by the mood of a nordic folklore. It takes place in a large forest in the middle of winter, and I tried hard to replicate the feeling of the cold and the darkness you can experience in such a place.


It’s not so much about the mythical elements, but more about the safety and warmth of the home, and how it contrasts with the danger and mystery of that which lurks in forest at night.


I can’t say I’m influenced by Irish folklore. However, since I moved here, I’ve gotten involved with the local poetry community, and it’s inspired me to include poems and poetry-like passages in my stories.


Do you have any writing rituals?


I write significantly better when I listen to music in my headphones.


I also enjoy going to the local coffee shop, or the pub, to write but it’s a habit I’m trying to break. It gets a bit costly when you do it every day.


What is the best piece of writing advice you’ve ever been given?


There’s a lot of good writing advice out there, both technical and abstract, and it’s hard to choose.


One I keep coming back to though is from Neil Gaiman, and it’s something along the lines of: “As long as you do it with enough confidence, you can do whatever you want.”


If I were to give a piece of advice on my own it would be:


“Do not reject the advice you’re given just because ‘there are no rules for writing.’ Make sure you understand the theory behind the advice, and then make up your mind.”


What is the hardest part of being an independent author?


Getting people to read my books.


Would you ever consider getting published by a traditional publishing house?


What are some of your favourite themes to explore in writing?


This is from Chapter 16, and it’s something halfway between a comic interlude and verbal posturing, before things start getting serious.


“Roy van Waldenberger…” The elf gave a slow shake of his head, and the smile was all gone. Nothing but a disappointed frown remained. Clear as day. “What in the world were you thinking?”


Roy grimaced. That was the million League question, wasn’t it?


“I’m sorry, Symmindur,” he said. “You know I wouldn’t come here if I had any other options.”


“Pish, posh. I’m talking about your name.” Symmindur jabbed a long white finger into the armrest of his chair – driving home a point. “Roy van Waldenberger.”


“Yeah, well, so is your face.” The words were out of his mouth before he even had time to think about it, and the smug grin too.


Over in her chair, Alene gasped.


For a brief instant, Roy’s expression wavered, but he forced the grin back in place. This was how they’d joked back in the day, and he shouldn’t be afraid of slipping back into old habits – not with an elf. Rather the opposite. Fourteen years were like nothing to someone like that.


“Oooh…” Symmindur pursed his lips and slowly shook his head. “That’s a sick burn. Let me get some ice.”


Smirking, and without taking his eyes off of Roy, Symmindur lifted his right hand, and began moving it in a circular motion above the little table with the decanter and the whisky glasses. Thin tendrils of faint white smoke rose from his fingertips, and the temperature in the room dropped by several degrees.


Roses of frost wound their way down the sides of the glasses, and then Symmindur snapped his fingers. Three times, he snapped them, and with each snap, a perfect sphere of ice the size of an eyeball dropped into the glass he currently held his hand above.


Roy pressed his lips together and nodded. Tried not to let it show the hairs on his neck stood on end from the chill, and tried to keep his teeth from clattering.


“Cool…” he said, and managed to keep his face straight for moment – well over a second. Perhaps even two.


Alene, by contrast, let out a loud groan and rolled her eyes so hard they might as well fall out of her face.


Within his mind, the wolf pricked its ears and wagged its tail, and Roy couldn’t help but chuckle to himself. This must be how fathers felt when they embarrassed their kids.

Book one is available free until September 1 so snag your copy now to check out the series: